I wanted the title to be “Eat, Drink and Be Merry”, but it would have made the link too long. As the title suggests, April and May continued to have a lot of culinary and related events.

One MeetIn member is a pastry chef and he holds pastry tasting events every couple of months. I was finally able to attend one in early April. For a nominal charge, we sampled artisan tarts, mousses, cakes, chocolates and truffles on a Friday evening. Loaded up on sugar, we then headed out to Les Deux Pierrots for some merriment. It was described to me as a traditional Old Montreal hangout. The crowd spanned all ages, all there to have some drinks, listen to the live music and, if the music is good, dance. For those of you with some Kingston context, it’s kind of like the Wellington (circa mid-90’s) mixed with Clark Hall Pub on two floors. The music covered traditional Quebecois music (which is very similar to traditional Irish, Celtic, Newfie, etc. music) to rock covers spanning the 60’s to this decade. We were the group of 30-somethings dancing off to the side while the students crowded the stage. I had so much fun that I went back with my Vancouver visitor over the May long weekend.

The “In Search of the Best…” theme dinners continued. They fill so quickly that I often wasn’t able to RSVP in time. Still, my culinary adventures included Japanese shabu-shabu (fondue), traditional Mexican (think: mole rather than fajitas), Tibetan, a very unique wine bar (every hear of candy cap mushroom milk foam in a dessert?) , couscous, and Greek. Outside of the official MeetIn theme dinners, I also experienced a more traditional fondue place and a couple of terrasses in Old Montreal, an Irish pub, a fine Italian restaurant, and an all night Chinese food place after one pub night. Although it seemed like a good idea at the time, I’m not sure about the last experience. Next time I’ll stick with poutine. I’ve started collecting business cards from all the restaurants and will keep a scrapbook, just so I remember where I’ve been.

As much fun as the restaurants have been, I wanted some more culture in my life. In April, I attended “Shakespeare Unplugged” at the Atwater library. The two-person play expertly wove together scenes and lines from a variety of Shakespeare’s best known plays. I was surprised at how many I recognized.

The first Friday in May, I hosted my first MeetIn event to attend a concert/cocktail party at the contemporary art museum. That was a unique experience. For the price of admission to the museum ($8), we could sip yummy cocktails from the cash bar, enjoy the museum (which we didn’t manage to do) and attend an hour-long concert in the performance hall. The museum holds the Vendredi Nocturnes every month and it’s so popular that they don’t announce the name of the band until the day of. We saw Bob, a dark, eclectic local band which included “go-go boys” (read: performance art) in their act. The band was excellent, though not exactly my thing. A picture of a “go-go boy” and a toy reminding me of a Replicator from Stargate SG-1 is below: 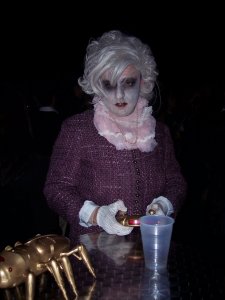 A little more of a traditional cultural event, a friend from MeetIn and I went to see Neil Simon’s The Odd Couple at a small theatre. The acting was fantastic and the intimacy of the theatre put G and I in the “splash zone” of flying beer spray and chips as Oscar was demonstrating his typical hosting style.

Working for a company that builds games for licensed movie franchises has its benefits. Our social club sponsored two movie nights to see Iron Man and Indiana Jones. Both movies were great fun. We’ll be going to one more movie in June.

Since moving to Montreal, I’ve been watching Sex and the City reruns on TV. May was capped off with a girl’s night out to the Sex and the City movie last night. I’m pretty sure every woman in Montreal was at the movie theatre last night. The movie was great, which we discussed over cosmos (what else?) and martinis at Jello Bar. Once again, I wish I had had my camera. The lava lamps were mesmerizing. Ah… more for my cell phone photo gallery.