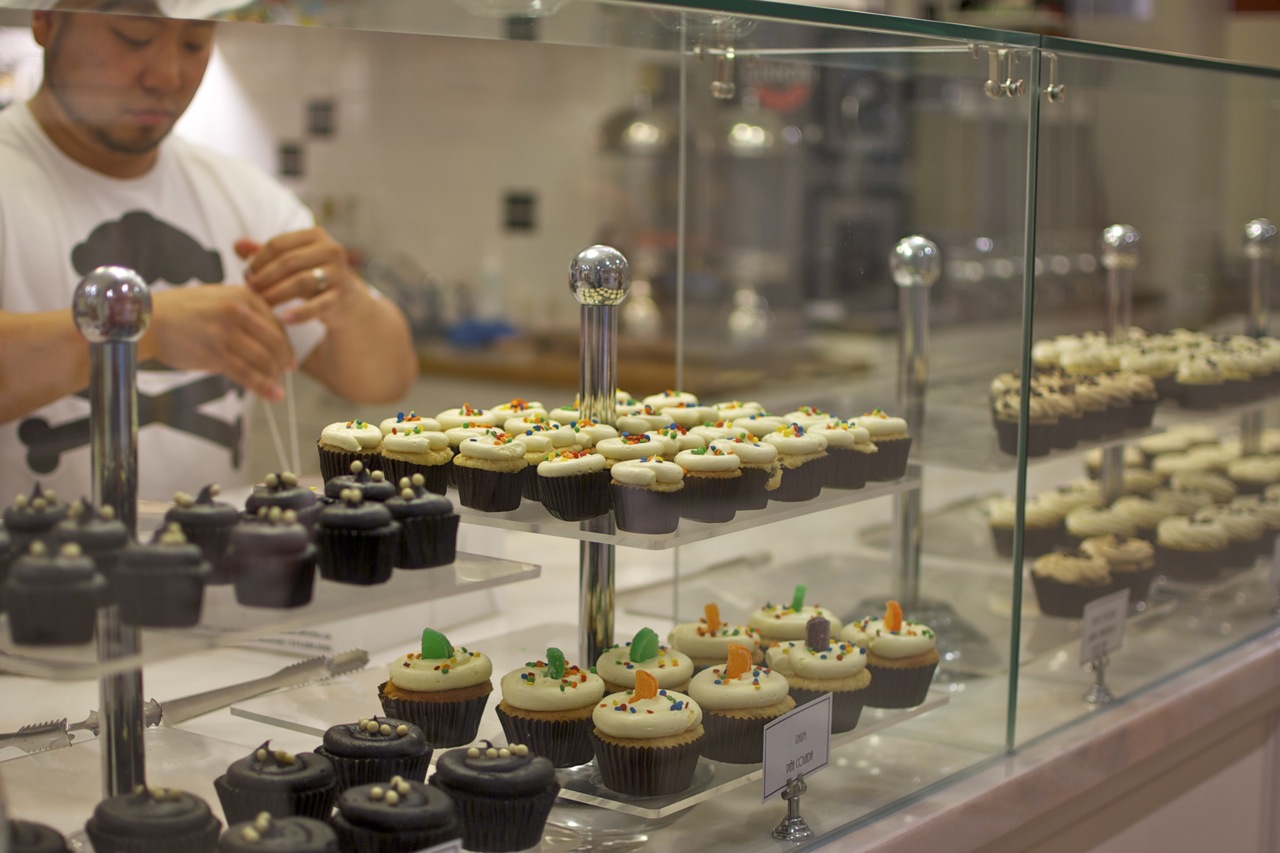 I happen to live near two cupcake shops, one of which I walk by practically every day and the other happens to also sell their treats at the Jean Coutu near my work.  The one I walk by has proven to be much more of a temptation – I stop by about once a month and pick up a little reward after delivering a project milestone at work.  Still, I wondered how the two shops compared. So, for my birthday, I set up an “In Search of the Best Cupcake” Event on MEETin and a few of my MEETin friends helped me find out!

Our first stop was D Liche Cupcakes on St. Denis.  Co-owner Robert greeted us warmly and graciously gave us the run-down on the source of the deliciousness.  Their cupcakes are made with 90% organic ingredients and contain no bad stuff like Crisco.  The result is a moist, rich cake that is not too sweet.  We each bought two minis of different flavours.  I chose the chocolate raspberry almond (above, on the left) and the chili chocolate (above, on the right).  When I peeled the wrapper off the first, I licked off the cake left behind.  I couldn’t help myself!  I love the chili and chocolate combination and this cupcake did not disappoint!  The first bite was rich dark chocolate with a little bit of spice in the after taste.  The second bite had the chili kick!  Sneaky spice… love it!  The chocolate raspberry almond is like a mini black forest cake, but with raspberry.  A friend had a vanilla cupcake that tasted like a little bit of vanilla heaven.  With very happy taste buds, we set off to the second shop.

The next stop was Petits Gateaux on Mont Royal.  As soon as we walked into the shop, it was a completely different experience.  Unlike D Liche, the show cases seemed quite bare.  Being Grand Prix weekend, the street fair on Mont Royal likely kept the shop very busy that day.  As we selected our treats, we realized the cupcakes did not look as enticing.  To do an honest head-to-head comparison, I selected two minis: Chocolate Passionfruit (above, on the left) and Irish Coffee (above, on the right).  As soon as I peeled off the wrapper, I knew the competition was over.  There was nothing on the wrapper even to tempt me to lick it.  Both cupcakes were disappointing.  They were dry, too sweet and  the flavours were non-specific.  I could barely taste the passionfruit, but it was not masked by the chocolate.  The irish coffee had a hint of mocha, but there was nothing particularly Irish about it.  One friend complained about the presentation – it had looked like someone had started to peel off the wrapper, changed their mind and returned the cupcake.  It wasn’t the case, but the wrapper coming off of the cupcake is a clear signal that the cake is too dry.  We couldn’t even bring ourselves to discuss the cupcakes in the shop – the girls behind the counter looked like their day was tough enough.

So, the clear winner of the best cupcakes in the Plateau is D Liche Cupcakes on St. Denis.  The picture above is only a small section of their tempting showcase.  Robert and Ken will graciously tempt you with their flavours-of-the-week. If you have never tried their cupcakes, I recommend getting a box of six different minis so you can decide what flavours will be your favorite!