It feels like we’re living in the tropics. Almost every day starts out sunny and then winds up raining in the afternoon or evening. Despite the wet weather, I still managed to have some summer fun in Montreal. I can’t believe September is around the corner already.

I was too busy with moving to get tickets to one of the Just for Laughs shows. I did manage to walk through the street festival in the Latin Quarter one evening. It was pretty cool. There were people on stilts, giant insects (picture above), bands, living statues, someone creating a sand sculpture, giant balloons, acrobatic street performers… the list goes on. 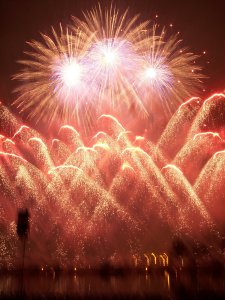 Fireworks are a big part of Montreal in the summer with the international fireworks competition. In total, I saw three shows – one from Terrasses Bonsecours in Old Montreal, one from the fire escape of my building and one, which was by far the best, from La Ronde, where the fireworks are set off. The picture above is from the last show. China put on a spectacular display! It is definitely worth the ticket price to see the show from La Ronde. Speaking of La Ronde, I am completely convinced that it is guaranteed to rain whenever I go there. Fortunately, it stopped raining in the evening so we got in a few more rides and could enjoy the fireworks. 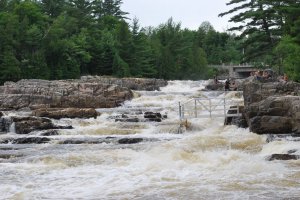 Even after selling my car, I still went on a couple of road trips. A group of us from MEETin spent a relaxing Sunday at the Cascades Rawdon. We never go hungry at MEETin events. There was enough food for the BBQ to feed a group almost twice as big. “Swimming” in the rapids was like being in a giant, cold jacuzzi. Fortunately, the threat of rain kept the crowds away, but the rain held off until the drive home. A few weeks later, the xtreme foodies group did a day trip to Vermont where we sampled chocolate, cheeses, tea, and did a pilgrimage to the home of Ben and Jerry’s. Since we couldn’t bring anything back across the border, we wrapped up the trip with a picnic in a park in the mountains. We’re now planning to go back in the fall when the mountains change from green to yellow, red and orange.

The “search of the best” restaurants continued. I enjoyed shark curry at an African-Reunionaise restaurant. We’re planning to go back when the weather gets colder, but the event will have an “over-18” advisory because the chocolate cake was very… satisfying. Even the guys got the look that usually only women get with good chocolate. We also sought out the best Thai, Pho, southern BBQ, Old Montreal bistro, and one really good dessert place. We also enjoyed another pastry tasting, courtesy of our group’s pastry chef.

Other summer fun included The Tempest at probably the only dry performance of Shakespeare in the Park, a New France ghost hunt in Old Montreal, and a walking tour of my new neighbourhood – Plateau Mont Royal.

In between all the summer activity, I’m slowing getting settled in my new place. An anniversary also came and went, which was marked with a conversation for the first time in six months. It’s the start of many conversations. It’s a good thing. I’ll leave it at that for now.