Mental note for next year: take my vacation in the summer with everyone else. Considering I don’t have children, that statement seems like I’ve lost all sense of reason. Why would I take vacation at the same time as everyone else? Well, insanity set in after everyone else got back from vacation after Labour Day, so my fall vacations felt like great escapes worthy of at least a little respect from the great Houdini.

The first escape was to Quebec City the first weekend after Labour Day. This year is Quebec’s 400th Anniversary so I wanted to see Vieux Quebec before the end of the year and before the winter. It was also a weekend getaway for D and I – the first in over a year. We had a great time walking around the old city and the Citadelle. I was even treated to a horse and carriage ride. We’re thinking we would like to go back for the Winter Carnival. 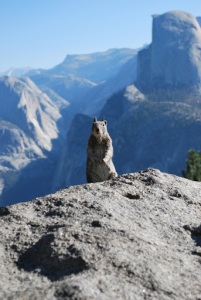 The next weekend I flew to San Francisco to spend a week in northern California. It was basically a photo vacation; I had to show California to my new camera. It was also an opportunity to catch up with old friends and meet some of their new babies. It was nice to have an extra week of summer weather and visit almost all of my favourite places. I took about 138 pictures in San Francisco, 160 pictures at Stanford, Los Gatos, 17 Mile Drive and Point Lobos, and a whopping 320 pictures at Yosemite. The 17 Mile Drive and Point Lobos were as spectacular as I remembered them, but the entry fees doubled over the past five years. (It was still worth it!) Because it was mainly a photo vacation, I made a point of exploring almost all of Yosemite Valley and even drove up to Glacier Point. I saw more of Yosemite on this trip than I have with all my other trips their combined. Capturing wildlife with my camera, though, was more challenging on this trip. I had some great potential shots of pelicans at Point Lobos and deer and racoons at Yosemite, but I didn’t have my camera ready. The exception was the squirrel at Wayburn Point – it was like he was a professional model. It was tough choosing that as my favourite picture to post on this blog.

The weekend after I got back from California, I joined the xtreme foodies gang on another trip to Vermont. The mission this time was microbrewery tasting and viewing the fall colours. Most of the day was spent on a very scenic drive through Vermont. The fall colours were gorgeous and we were treated to rural postcard scenes with cows, sheep and even a camel (!). The beer samplers in the group enjoyed the offerings at Otter Creek microbrewery and other microbrews over lunch and dinner. We made it to Magic Hat brewery… just in time for closing. At least we got some interesting photos there. It was the same case for the wildflower farm. Another mental note to self… pass on Vermont red wine. It wasn’t bad; it just wasn’t worth ordering. 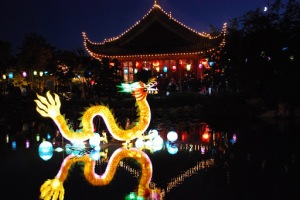 In addition to the vacations, both MEETin and my alumni association have been active. For Alumni, we held a successful wine tasting at a lovely home in Outremont. As we walked to the metro, we spotted a wild fox hanging out in the very civilized neighbourhood. The MEETin “in search of” dinners are starting up again with a Portugese bistro. A group of us went the the Chinese lantern festival at the Botanical Gardens where we viewed and photographed the largest display of silk lanterns outside of China. We also started up a German conversation group which will be meeting monthly, which I fear will continually affirm that my German is better than my French. I really, really, really need to start going to the weekly French conversation group. Yesterday was the inaugural event for a series of teashop visits. For $4 per person, we sampled three different teas for which our hostess made two large tea pots for 7 people. Needless to say we were all well caffeinated after that event. Good thing I could balance my tea buzz with red wine and lots of cheese at a party afterwards.

I missed the homestyle Japanese dinner with my Mom’s visit over Thanksgiving. I more than made up for it by cooking a fabulous Thanksgiving dinner. It was the first time my Mom has been in Montreal since landing in Montreal when she emigrated from Germany 48 years ago almost to the day. While she was in Montreal, I showed her Old Montreal, Atwater Market, Jean Talon Market and a bit of the shopping in the Underground City. We had gorgeous sunny weather – a perfect time to visit here. I love Fall in this corner of the country.

One thought on “Fall Vacations!”