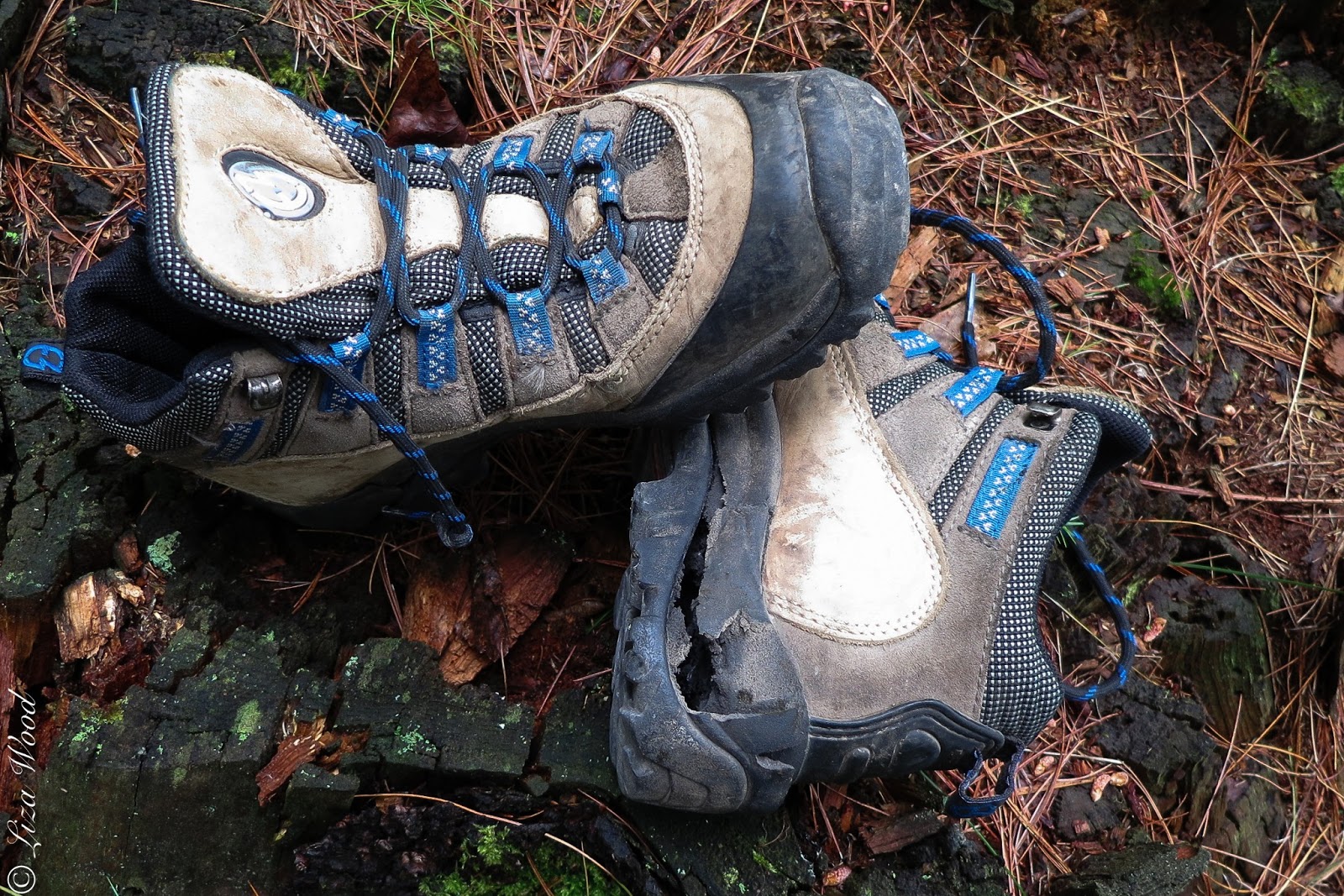 My faithful hiking boots of nearly 13 years were destroyed by the Cup and Saucer Trail on Manitoulin Island. For our 10th anniversary, D and I spent a week at the same cottage where we spent our honeymoon. We decided to hike the Adventure Trail along the Cup and Saucer Trail, since it was so much fun 10 years ago. Well, 10 years is a long time and we were not 100% sure where the Adventure Trail started, so when we saw the sign for the alternate loop under the cliffs, we thought that might be it.

It wasn’t the Adventure Trail, but it certainly was an adventure.  It was a very rough, loose rock path along the limestone cliffs. I was happy to have my boots since the ground was unstable and covered with poison oak.  We eventually got back to the main trail and called it a day, returning two days later to finally do the Adventure Trail. Unfortunately, time had eroded big sections of that trail, so it wasn’t as much fun. Still, the views along the Cup and Saucer trail are as rewarding as ever.

It was only after the second hike that I saw how destroyed my boots were. The soles of both were completely ripped. All that was left to do was take a couple of photos, deposit them in the garbage and reflect on their 13 years of amazing service.

When I moved to California in 1999, I started to do a lot of hiking. It was during the dot com boom, so friends from Canada were in the area regularly.  We would find an interesting park and go explore. By the summer of 2000, it was clear I needed to invest in some proper hiking boots, so bought them while attending a friend’s wedding in Prince George, BC. Back then, digital cameras were just coming out, but I remained faithful to my Pentax ESPIO 928 35mm.  As a result, I don’t have many digitized photos from 1999 to 2002 when I started getting CDs made with my film development.

The most impressive hikes I have done were in Yosemite National Park, attempting Half Dome twice and completing the Glacier Point/Panoramic Trails twice. Yosemite is still my favourite place on earth so it was a natural place to take my first photo vacation with my Nikon D60 DSLR in 2008.

Living in California also gave me many opportunities to hike along spectacular seashores, giant redwoods and to get to know wonderful people along the way.

After moving to Vancouver, I did a lot of business travel for the first 18 months. Still, I found time to hike in the area, visiting Buntzen Lake and Lynn Canyon the most.  I finally converted to a Kodak compact digital camera in 2006, but all the photos from my time in Vancouver were backed up on a hard drive that is now failing, so I can’t post any right now. At least the best of them have been printed!
After moving to Montreal, my wanderings became more urban, but vacations still take us to more rugged areas. My faithful boots took me through Zakros Gorge in Crete, through some parks in rural Quebec, and even back to California.
I will invest in another pair of good hiking boots and I can’t wait to see where they will take me!

2 thoughts on “Homage to a Great Pair of Hiking Boots”